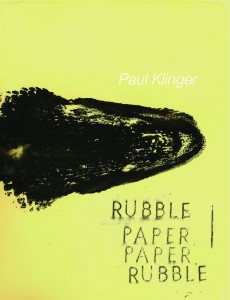 Read a sample from this book

“Tracing the development of Paul Klinger’s work over the past decade (the many handmade/altered chapbooks collected in the Dusie catalog), one sees emerge a type of collage that, rather than being predicated solely on urban or commercial/mediated excess (a printed skin, as in the early collage works of the Modernists)—models a poetics analogued on the animality of reptile skin—the creature archive that intersects with pre/history, with spectral extinction, and with the conflicting memorials of settlement. For certainly Klinger’s work is both a study in surfaces and creature-based constraint—a method which acts to expand presences in the room—and one wherein gaps in the rational, and on the page, come to signal those presences kept at the margins of the archive. Unlike the dynastic scribes of China who were charged with making sculptural rubbings as a way of transmitting official Imperial narratives, Klinger’s treatment of the historical markers of Texas (which tilts toward the coast) works reverse colonially—an anti-extinction sieve—to reveal & preserve presences (like the alligator it takes for its mascot) overprinted in conquest. As the rubbings themselves add an extra dimensional texture to the page, RUBBLE PAPER, PAPER RUBBLE presents a memorial dimension outside of official transmission. In this sense, Klinger’s work represents not only an expansion of the archive of place but a break-out of presences from what seemed so set in stone.”—Ash Smith

“RUBBLE PAPER, PAPER RUBBLE was composed by visiting historical markers throughout southeast Texas and making graphite rubbings from the embossed text. At its heart, the project uses poetry to make and unmake official local histories. The book also contains color plates featuring a series of alligator prints I made while in the field, and another alligator print is featured on the cover. These are prints made directly from the animal’s body, a kind of swamp treatment of gyotaku printing. The rubbings are visual poems and landscapes that explore the musicality of the outside archive. While tracing the map of state historical markers to chart an itinerary, I started building strands of meaning in the markers I sought out. Transportation itself factored into the structure of the book. It’s a ‘roadside’ book that captures voices only as they are passing through and attempts, out of that eavesdropping, to create a grammar of place.”—Paul Klinger

Paul Klinger grew up around alligators in RWJ Airpark, just outside of Baytown, Texas. He received his MFA from the University of Arizona and his JD from the University of Houston. He has published several chapbooks as a member of the Dusie Poetry Kollectiv. At present, Klinger works as an attorney practicing maritime law in Houston, Texas. He enjoys assisting his wife, Dawn Pendergast, with production of hand-sewn chapbooks for the LRL Textile Series. He is the author of RUBBLE PAPER, PAPER RUBBLE (Further Other Book Works, 2013).


Warning: A non-numeric value encountered in /home/furthero/public_html/wp-content/themes/Builder-Madison/lib/builder-core/lib/layout-engine/modules/class-layout-module.php on line 499